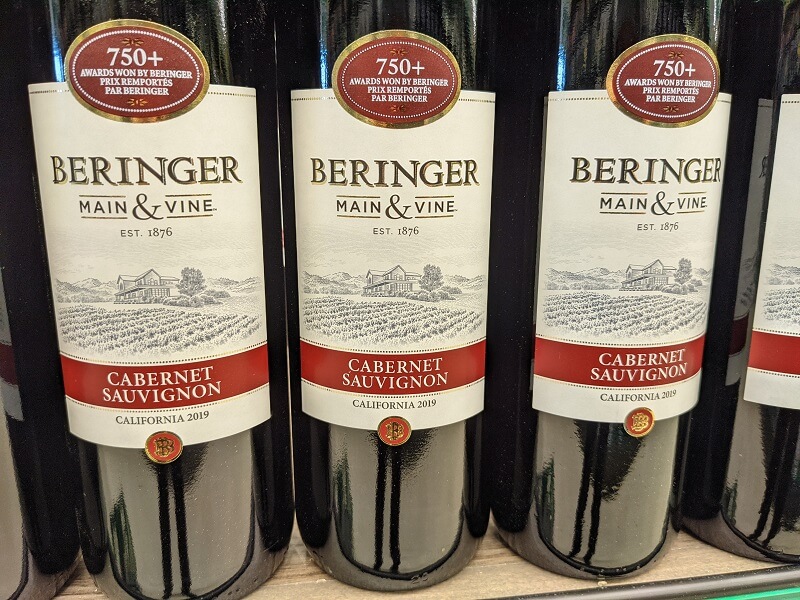 Cabernet Sauvignon is also high in alcohol, and higher amounts of alcohol make for bolder tasting wines. This is due to the alcohol being a carrier of flavour.

Cabernet Sauvignon from Napa, California is the most popular style of the red wine, however, you’ll find Cabernet Sauvignon produced around the world, including France (where used in the mighty Bordeaux), Argentina, Chile, Australia, South Africa and Italy (in Super Tuscan blends).

The tannin found in Cabernet Sauvignon loves the fat and protein found in your steak.  When tannin reacts with protein, the wine becomes less bitter and more fruity and expressive.  It’s like the curtain is dropped, and all the complex flavours of black pepper, cinnamon, coffee, herbs, mineral, and raisin shine through.  The tannin also works hard to break the meat proteins down, making the steak taste even more juicy and flavourful.

With grilled steak, a heavily oaked Napa Cabernet Sauvignon is delicious as the bitterness of the tannin, along with the vanilla and chocolate flavours, complement the grilled flesh of the beef perfectly.  Meanwhile, if you enjoy a sauce with your Steak, Cabernet Sauvignon will love a dark mushroom sauce, red wine reductions or peppercorn sauce.

In a lot of instances, quite a bit of fat is cut off from Lamb Chops before cooking.  Otherwise, the Lamb Chops might taste sinewy and tough.  In this instance, go for an aged Cabernet Sauvignon.  Even though Lamb Chops are flavourful, a young Cabernet Sauvignon is much too tannic, and there won’t be enough fat in a trimmed piece of Lamb Chops to smooth out the wine.

A refined aged Cabernet Sauvignon is outstanding with Squab.  Squab is a lean meat and should not be overcooked for this pairing to work, as you don’t want to lose any of the tender flavours.  When paired with an aged Cabernet Sauvignon, the wine adds juicy flavours of cassis and blackberry to this dish, adding an incredible amount of decadence. You’ll also get delicious flavours of mocha, tobacco, vanilla, and chocolate notes, which complement the squab’s roasted skin.  You’ll also get hints of herbs and spice in Cabernet Sauvignon, making it a natural pair with any seasonings accompanying your Squab.

Meatloaf can taste dry and bland as it is often overcooked, which knocks out the flavour or made with lean meats, which means there’s very little in the way of fat to keep the Meatloaf flavourful.  Thus, you’ll often find recipes calling for a ketchup glaze to liven things up.  With a bold Cabernet Sauvignon makes a wonderful wine pairing with Meatloaf as you can skip the ketchup and enjoy your Meatloaf as is.  One sip of this juicy red wine and your taste buds will be in heaven with all the delicious flavours of blackberry, black currant and plum.  The wine also injects some complex flavours of mint, black tea, black pepper, tobacco and mocha into the mix, giving the dish a lot more diversity.

Young Cabernet Sauvignon works well with Meatloaf as the tannin in the wine is softened by the high-protein content of the Meatloaf.  This meeting of tannin and proteins makes the wine taste much more juicier and richer.  Tannin also denatures the protein molecules, which allows the Meatloaf to taste much more savoury and delicious.

While BBQ ribs are fatty and flavourful, the flavour is also delicate and subtle.  I prefer my ribs slow-cooked and served as is and not drenched in barbecue sauce.  With this style of BBQ ribs, an aged and subdued Cabernet Sauvignon makes for a wonderful pairing partner as the tannin in the wine has already been softened, meaning the wine won’t overpower those tender rib flavours. Meanwhile, the chocolate, vanilla, smoke and tobacco flavours complement the smoky and grilled BBQ flavours of your ribs.

If your ribs are slathered in a sauce, a young Cabernet Sauvignon could work, but it might also be too tannic.  Many barbecue sauces are tomato-based, and tannin and tomato sauces do not mix well as the high acidity of the tomatoes make the tannin taste flat and metallic.  In this instance, I’d look to a Cabernet Sauvignon from Argentina, Chile or Australia that is ready to drink and not as full-bodied provided the Barbecue sauce isn’t too tomato-based. In this instance, the herbal and spicy quality of the Cabernet Sauvignon will mesh well with any spices and smoky flavours found in your sauce.