Rioja is a medium-bodied Spanish red wine that pairs up best with tapas, hamburgers, stews, pork, lamb and chorizo. When buying a Rioja, you have the option of a young and tart Rioja or aged Rioja.

Rioja is a Spanish Wine Region, and thus, Rioja does not refer to a grape but rather a blend of grapes produced in this region.  Tempranillo is the main grape, with Garnacha (also known as Grenache), Graciano and Mazuelo as other grapes that may be blended in.  When young, Tempranillo is fresh and fruity with notes of plum, cherry and tomatoes.  When aged in American oak, Tempranillo turns into a full-bodied red wine and develops rich notes of leather, coconut, chocolate, coffee, earth and pepper.  Meanwhile, a moderate amount of Garnacha adds a ruby-like hue to the wine, while Mazuelo adds a touch of spice.

White Rioja also exists, and here you’ll find a dry white wine that pairs nicely with chicken, fish, paella, seafood and tapas.  In the future, I will cover White Rioja and go into more detail.

Rioja Crianza is a lighter red with a refreshing tartness, and fruity flavours of cassis, raspberry, black cherry and strawberry.  To be labelled Crianza, the wine must be aged for two years, with at least one year in a barrel.  Thus, you can expect some notes of vanilla and toast to saddle up beside the tart fruit flavours.

Rioja Crianza is a lighter red, you’ll want to pair it up with lighter foods that have still have a bit of substance to them.  Beef jambalaya, roasted chicken, moussaka, assorted meat sandwiches, pork tenderloin, cabbage rolls, paella, Swedish Meatballs, tapas, and Hungarian goulash are all excellent dishes to pair up with Rioja Crianza.  Rioja Crianza is also wonderful with spicier dishes that require the light fruity flavours to calm down the heat, such as Rogan Josh or spicy pork tacos.

While we mentioned that Rioja Crianza is light and tart, it does not pair well with Pizza.  Rioja Crianza does not have enough acidity to hold up to the acidity of tomato sauce, and when combined, the wine will end up tasting like aluminum.  Finally, if you are eating Tapas and Oysters come your way, keep your Rioja far away from the oysters.  The combination of briny oysters and Red Rioja creates an unpleasant fishy aftertaste that takes forever to go away. 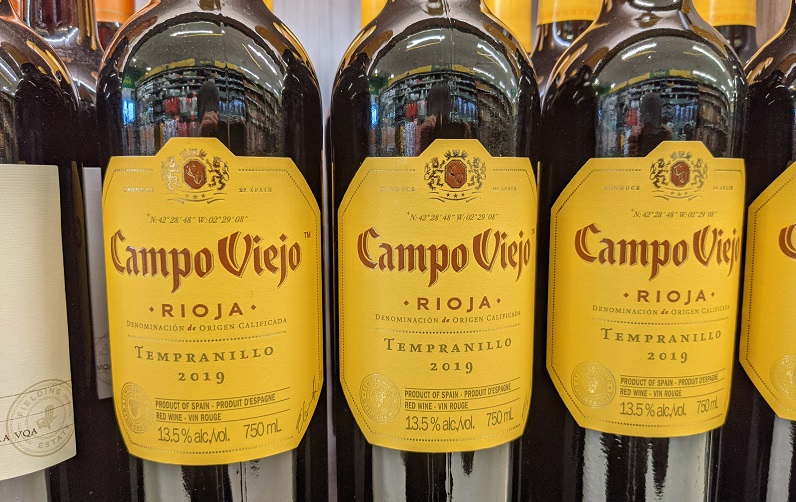 Jamón Ibérico is a salty, sweet Spanish-cured pork that melts like butter in your mouth. Because the silky fats coat your tongue, you’ll need a light red like a Rioja Crianza to wash away the fat and salt in between bites.   Jamón Ibérico is also has a distinct sweet nuttiness (from the pigs being fed acorns) that will be overwhelmed by an aged Rioja.  Rioja Crianza, meanwhile, is soft, fruity, slightly earthy and has just enough tannin to bite into the delicious Jamón flavours and bring out the meat’s best flavours.

While the tannin in Rioja Crianza is at a medium level, they are considered soft tannin.  Soft tannin means the wine is ready to drink, and while the tannin still has a level of astringency to it, it does not come across as harsh.  Soft tannin is ideal with Jamón Ibérico, as a robust red wine would destroy the melt in your mouth appeal of this beautiful cured meat.

Bursting with tart flavours of black cherry, cassis and strawberry, Rioja Crianza is refreshing against the crispy breading of this Chicken Fried Steak.  The red wine has medium levels of acidity to offer cut through the deep-fried greasiness and gravy, allowing each bite to taste fresh.  Meanwhile, the tannin in the wine offers enough personality to engage with the tenderized steak behind the breaded veil.

Rioja Crianza is fruity and acidic enough to cut through the rich gravy flavours found in Cottage Pie.  Furthermore, the cherry and plum flavours of the Rioja offer plenty of refreshment against the meat and root vegetables in the cottage pie, while the earthy and spice flavours of the red wine complement the root vegetables and seasonings in the Cottage Pie.  You’ll also find the right amount of tannin in a Rioja to bite into the rich meat flavours, making the Cottage Pie taste even more delicious.

For richer stews, such as a beef or venison stew, I’d lean more towards a Rioja Reserva.  With stew, the flavours often have time to mingle and evolve, and are much more suited toward the complex flavours of an aged Rioja.  Finally, with Shepherd’s Pie, which is the same as Cottage Pie but uses Lamb, a Rioja Reserva is a much more suitable pairing.

Rioja Reserva Rioja is perfect with grilled lamb, pork chops, duck confit, rotisserie chicken, grilled swordfish, liver and onions, tuna steaks, and hamburgers.  Some producers only make Rioja Reserva during the best years where the growing conditions are at their peak and with fruit picked from the very best plots.  Rioja Reserva is aged for three years, with at least one year in oak casks.  The wine retains some of the youthful playfulness of a Rioja Crianza while adding a kiss more of oaky flavours.

Lamb is fattier and gamier than beef, meaning it has more flavour.  The vibrant cassis and black cherry flavours of a Rioja Reserva contrast the flavours, and offer up a pleasant refreshing breeze of delight when paired with Lamb.   Lamb tends to carry any spices you add forward as well, thus it will appreciate the cinnamon, rye and star anise notes found in your Rioja Reserva.

For a rack of lamb, which has a sweeter and delicate flavour, or for Tapas, which involves a variety of delicious finger foods, stick to a Rioja Crianza.

Filet Mignon or Beef Tenderloin makes for excellent pairings with the soft tannin found in Rioja Reserva.  Filet Mignon and Beef Tenderloin are two cuts of beef that are tender in texture but also lacking in flavour as they come from lean cuts of the cow.  The soft tannin content gives Rioja Reserva a velvety, creamy texture that matches the rich and buttery texture of these lean cuts of beef.  The gentle oak ageing of wine imparts subtle flavours of aged leather, pipe tobacco and chocolate-covered espresso bean that adds interesting layers of flavour to each bite of meat without overwhelming the tender meat flavours.

Rioja Reserva would also be excellent with a Petite Filet Steak.

For fattier cuts of steak like a NY Strip Steak, or a ribeye steak, a Gran Reserva Rioja is more suitable as the wine will have a higher amount of tannin to contend with these flavourful cuts of steak.

Gran Reserva Rioja is aged for five years, with a minimum of two years in oak casks.  Expect deeper or more pronounced notes of leather, chocolate, truffle, butterscotch and tobacco with layers of stewed fruit that flirt with your tongue.  The oak in an aged Rioja loves anything grilled as the vanilla and chocolate notes complement the charred flavour, making Gran Reserva Rioja perfect with NY strip steak, veal chops and grilled swordfish.  Gran Reserva Rioja is also fantastic with beef wellington and Ojo de bife.

Expect to pay more as oak aging always adds to the expense of a bottle of wine.  The oak in an aged Rioja loves anything grilled as the vanilla and chocolate notes complement the charred flavour.

My favourite pairing with a Gran Reserva Rioja would be Veal Chops grilled medium-rare and served with a dash of salt and pepper.  The tender veal flavours hold up to the stewed fruitiness of a Gran Reserva Rioja while messing brilliantly with the wine’s flavours of leather, chocolate, espresso, tobacco and truffle.

The fruity flavours of Gran Reserva hit all the right notes when served beside a simple roasted pheasant, where the game bird is cooked in its juices.  The soft tannin of the wine embraces the savoury pheasant flavours allowing the meat to shine amongst the stewed blackberry, plum and cherry flavours of the wine.  Finally, the teasing smoky finish of a Rioja Gran Reserva complements the simplicity of this delicious dish.

Rioja Gran Reserva is an intense red wine, and Duck Confit is an intense food.  Salted and then slowly cooked in its own duck fat, Duck Confit is full of incredible flavour that absorbs the mesmerizing flavours of leather, chocolate, truffle, vanilla and tobacco that Rioja Reserva offers.  Plus, you get those refreshing blackberry, plum and black cherry flavours of Rioja.

Duck Confit is rich, sweet, slightly chewy, but full of fat, so each bite melts in your mouth.  Similarly, a properly aged Rioja Gran Reserva will be rich and smooth in texture complementing the mouth-feel of this tasty duck treat.

Paella is a Spanish dish of rice, saffron, and meat, and it only makes sense to pair Span’s most famous dish with its most famous wine. For seafood, chicken, rabbit, or pork Paella, a Crianza Rioja is appropriate as the young and fruity flavours will not overwhelm the dish’s humble flavours.  For heavier Paella, which might include beef, lamb, or Chorizo, Riserva and Grand Riserva Rioja make for excellent pairings.  With aged Rioja you’ll find more complexity and heavier tannin that match the meatier flavours of your Paella.

While I give this pairing four stars, it can rate higher or lower as there are so many variations in Rioja and Paella recipes and styles